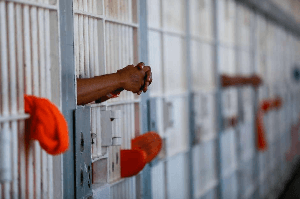 A former San Francisco sheriff’s deputy accused of having a romantic relationship with a jail inmate and lying about her property being stolen — including her department-issued firearm that her ex-con beau was later caught with — was convicted of fraud Thursday.

A federal jury in San Francisco found April Myres, 55, guilty of mail fraud and wire fraud, after an eight-day trial in the 2016 case. Myres’ attorney did not immediately return phone calls.

“The defendant not only lied repeatedly to profit from a so-called burglary, but allowed her service firearm to remain in the possession of a dangerous criminal for almost a full year,” he said in a statement.

The affair started to unravel in March 2016, when Myres reported that her home was burglarized and several of her possessions were taken, including her firearm and luxury items, officials said.

After making the report, she refused to cooperate with investigators, but two months later filed an insurance claim saying $67,000 worth of property had been swiped from her home, prosecutors said.

FBI agents soon began looking into the case and found not only that the insurance claim was bogus, but that Myres was wrapped up in an even-more dubious affair, prosecutors said.

While she had been working at the San Francisco County Jail, Myres had a romantic relationship with inmate Antoine Fowler, officials said. And when Fowler was released in January 2016, he went to live with Myres until a late-night dispute between the couple on March 24, the morning of the so-called burglary, prosecutors said.

Nearly a year later, on Feb. 2, 2017, FBI agents arrested Fowler and found him in possession of Myres’ firearm, officials said.

Myres later accused Fowler of stealing from her but did not disclose her relationship with him or tell investigators that he had been living with her, prosecutors said. She told the insurance company that she had no idea who committed the burglary and said no estranged boyfriends were responsible, officials said.

On top of lying about her gun being stolen, prosecutors said, Myres claimed she lost a Louis Vuitton purse, Gucci boots and a fox fur vest — all three of which were found in her home when the FBI searched the place in February 2017.

Myres and Fowler were indicted in April 2017. Myres is out on $1 million bond pending sentencing scheduled for October. She faces up to 20 years in prison.

Fowler was charged with being a felon in possession of a firearm and pleaded guilty on May 14. He was released on $50,000 bond pending sentencing. He faces up to 10 years in prison.

“Anytime a state jailer has a relationship with an inmate, it’s an abuse of power,” Fowler’s attorney, Kenneth Wine, said Thursday. “Mr. Fowler was clearly a victim of deputy Myres. He’s taken responsibility, and she gave him the gun. There was no question about that.”

The FBI heard about Myres’ relationship to Fowler before he was even released. Agents learned he “had made it known” that he would be getting a firearm from his jailhouse love once he got out, prosecutors said.

Officials with the San Francisco Sheriff’s Department said they provided investigators crucial information in the case, including recorded phone calls, and testified for three hours at trial on behalf of the prosecution.

The Sheriff’s Department handed Myres her termination papers during her second court appearance in March 2017, said Nancy Crowley, a spokeswoman for the department.